How to make a compliment or complaint.

You are entitled to make a compliment or complaint about the service you, or someone you represent, have received from Kent Police. 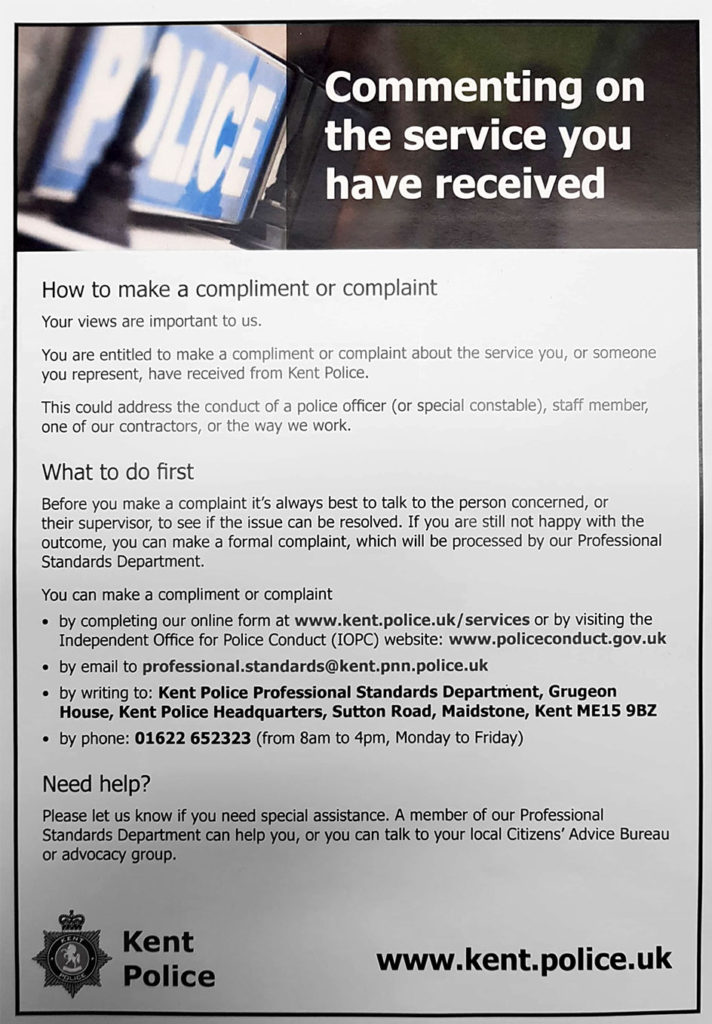 This scheme was set up to give official recognition of members of the public who make significant contributions to their communities. The scheme is supported by the High Sheriff of Kent, the Chairman of Kent County Council and the Mayor of Medway.

Please join us on Thursday 5 July at 7pm in the Village Hall where the Parish Council will be presenting the late Trevor Ledamun’s wife with this award for all of his services to the village.

Drinks and nibbles will be served. A full Parish Council meeting will be held after this event at 7.45pm.

Trottiscliffe School Community Farm is being established with the assistance of the Parish Council who will be leasing them the land (2.6 acres off Green Lane).

The school intends to create a community asset that will also enable the pupils to learn more about where their food comes from and associated conservation matters. The school is preparing a ‘land-based’ curriculum to provide access to leaning based around the farm.  They already have on order, four micropigs which will be petting animals for the children.  In addition, twelve chickens will go onto the farm once a pen is ready for them. A volunteer has offered to provide some lambs during May.

The school intend to have Open Days.  Members of the local community will be able to come along to see what is happening and there are lots of opportunities for people to volunteer.  If you would like to volunteer your help please contact Dave Urmston on: wyewoodcottage@gmail.com

Trottiscliffe are very lucky to have the voluntary services of a tree warden.

Neil Moulton is very happy to provide advice on trees in the village and has given invaluable help to the Parish Council.

Neil has organised and carried out two tree walks in the village which were very well attended and provides regular blogs on this website (address to be advised).

A copy of the proposed Order, an explanatory statement and a map showing the lengths of roads concerned may be inspected during normal office hours at County Hall, Maidstone, Kent, ME14 1XQ or at the offices of the Ashford Depot, Javelin Way, Henwood Industrial Estate, Ashford, Kent, TN24 8AD.

Any persons wishing to support the proposal, or to object to it should write to Thomas Williams, Ashford Highways Depot, Javelin Way, Henwood Industrial Estate, Ashford, TN24 8AD or email tro@kent.gov.uk quoting the name of the Order and stating their reasons, by no later than 01/08/2016.

This website uses cookies so that we can provide you with the best user experience possible. Cookie information is stored in your browser and performs functions such as recognising you when you return to our website and helping our team to understand which sections of the website you find most interesting and useful.

You can adjust all of your cookie settings by navigating the tabs on the left hand side.

If you would like us to stay in contact with you, please download the GDPR Consent Form, complete it and return it by email to trottiscliffepc@btinternet.com

Strictly Necessary Cookie should be enabled at all times so that we can save your preferences for cookie settings.

If you disable this cookie, we will not be able to save your preferences. This means that every time you visit this website you will need to enable or disable cookies again.